Last weekend, as I was in Newcastle, I took the opportunity to go to Magic Weekend at St. James’s Park.

Magic Weekend is when all 12 Super League rugby teams play in one stadium over the course of 6 matches, 3 on Saturday and 3 on Sunday.  It’s £40 for all 6 matches, which is a very good deal.

Now, I’m not saying I had the best view in the house, but I pretty much did. 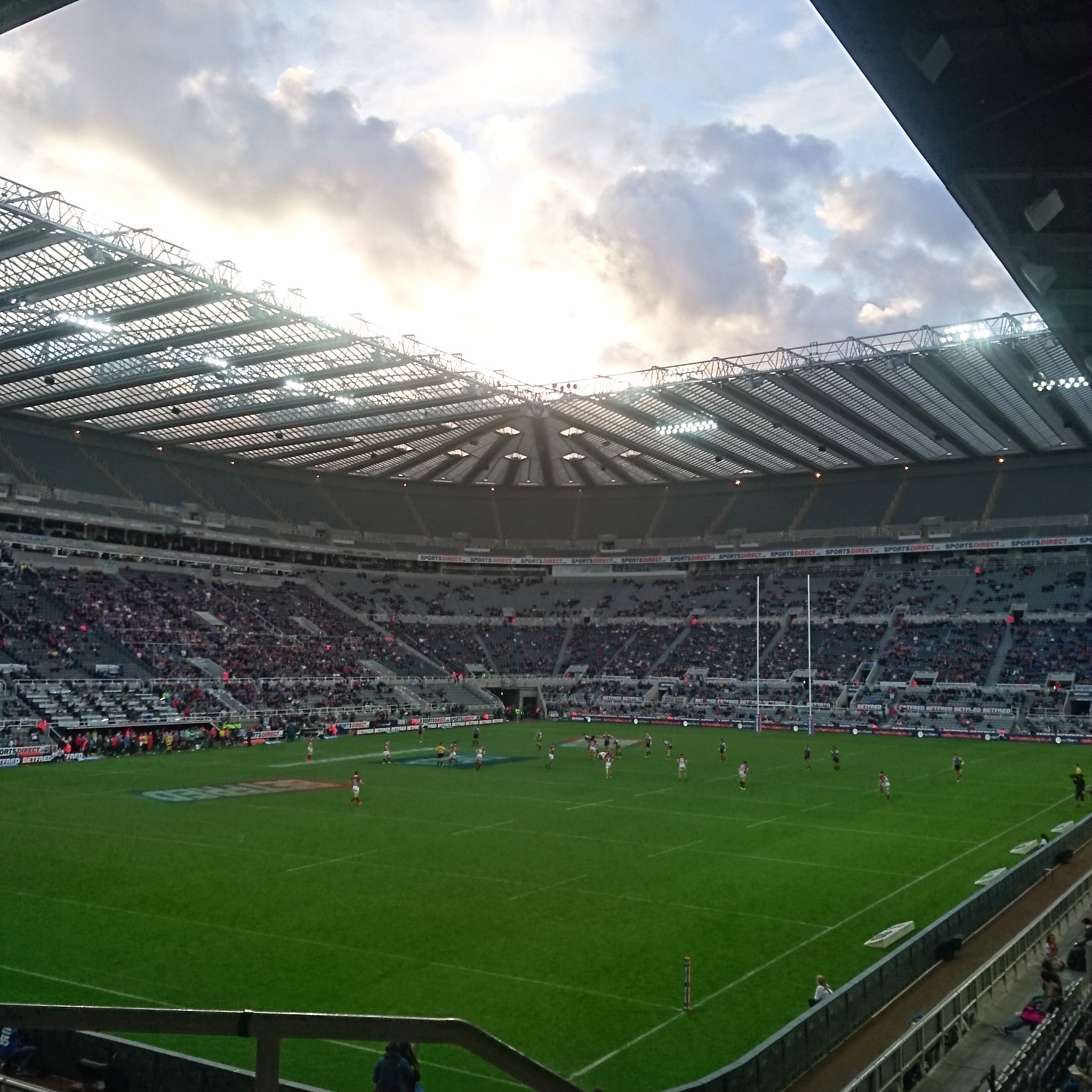 I missed the first ten minutes of Wakefield Wildcats vs Widnes Vikings.  On the way down to St. James’s I saw a couple in full Viking dress.

Complete with hat and horns.

Other important Widnes information includes the fact that the Viking fanclub is called the Stronghold.  Because of course it is.

The Widnes mascot was fantastic fun.  In between hitting the Wildcat mascot with his axe (don’t worry, they hugged and made up 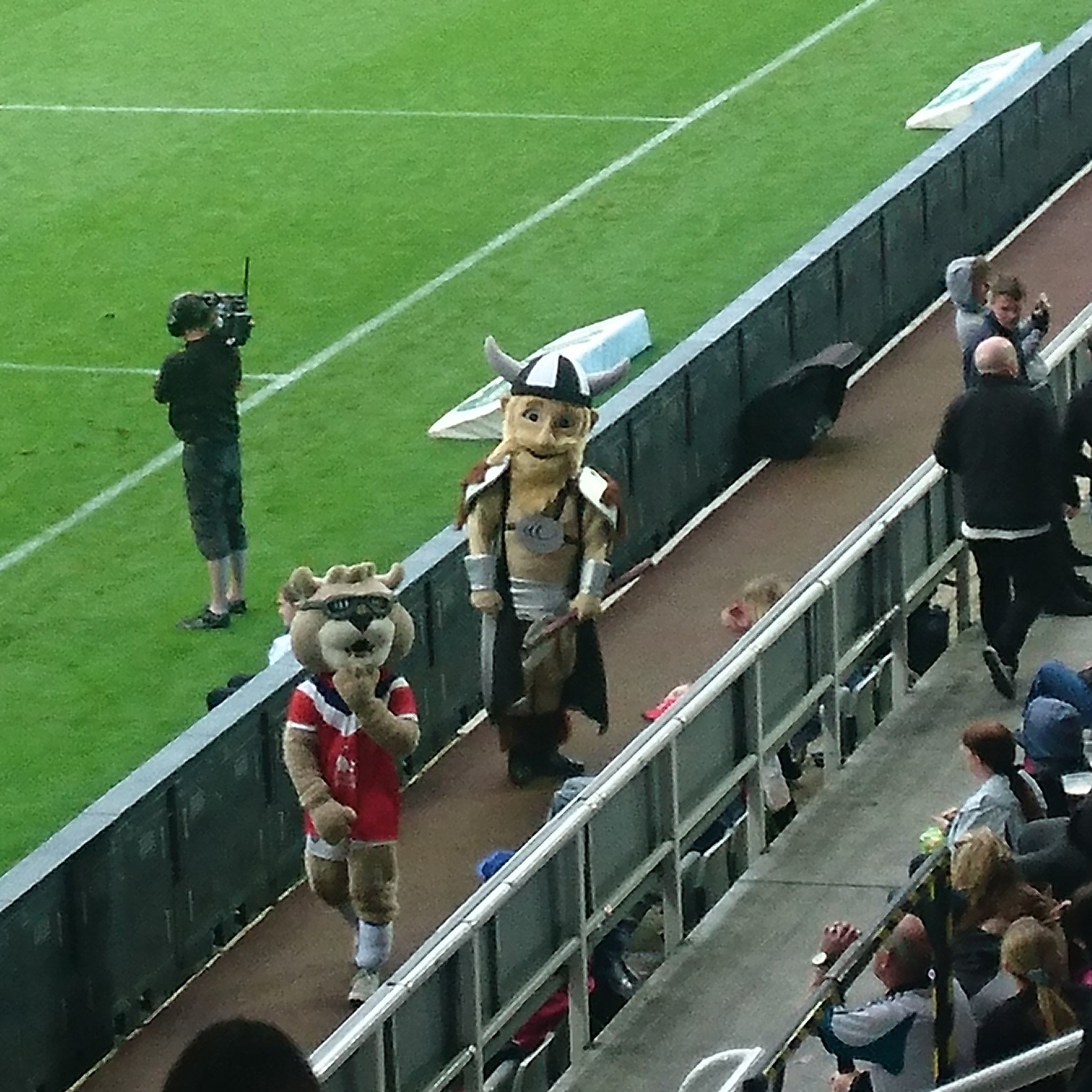 ), and lending a Widnes fan in a wheelchair the axe and running her up and down the side of the stadium so that she could hit people with it, he was fun chaos. Trust me, if you’re anything to do with Widnes, you need your fun from somewhere.

I did figure out what Widnes’s problem was.  They’ve got nothing going forward, so they have to defend constantly.  That leads to them tiring, their opposition scoring late on and Widnes losing.

Then came Saints vs Hull FC.

Now, I am a Saints fan.  I had no hopes going in.  I mean it, if they’d only lost by 10 points, I would have been happy.  They had been that bad.  It was also the new manager’s first game.  Low expectations were the order of the day.

No, I can’t explain it either. 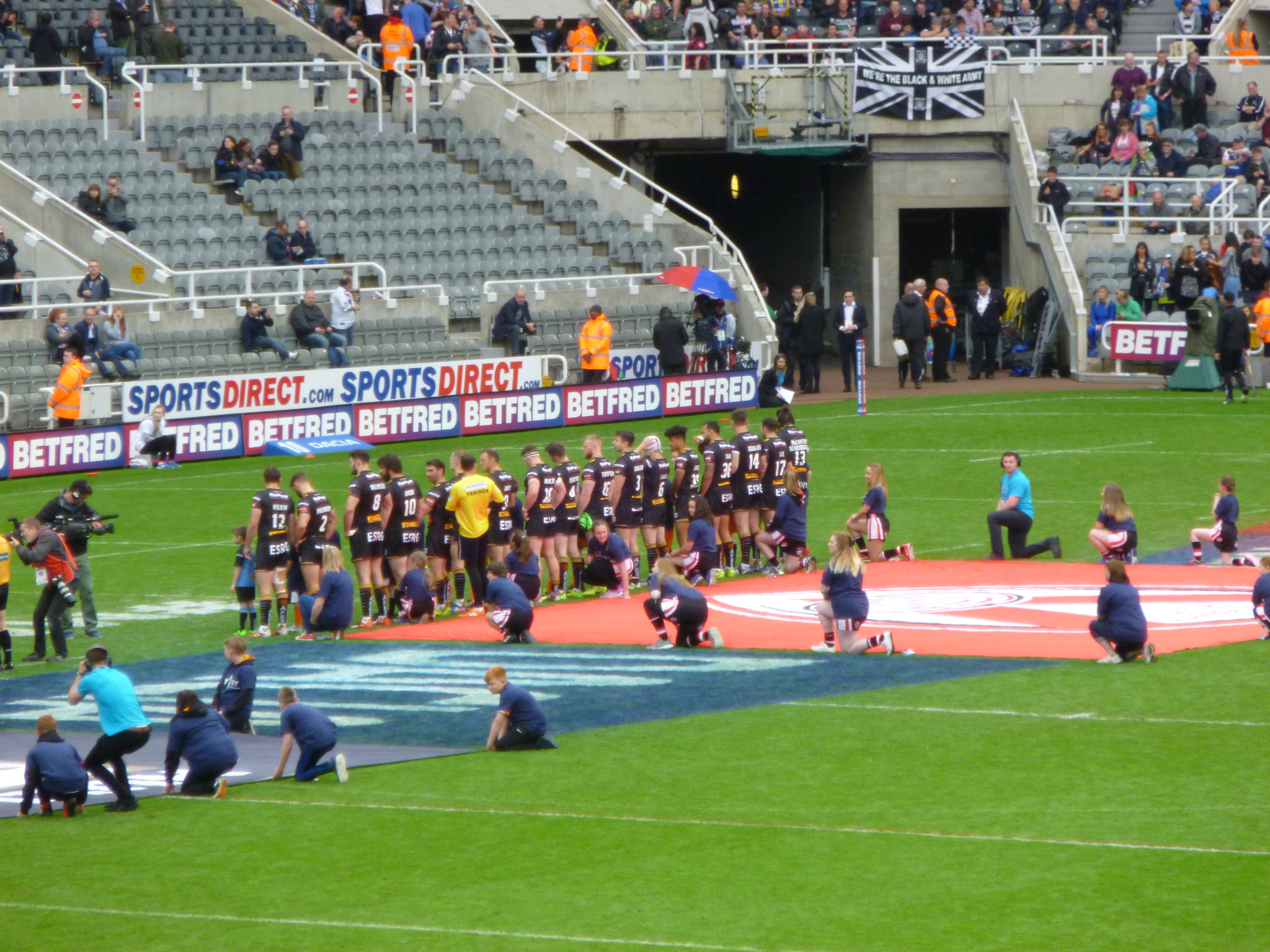 (The ever wonderful Saints team lining up) 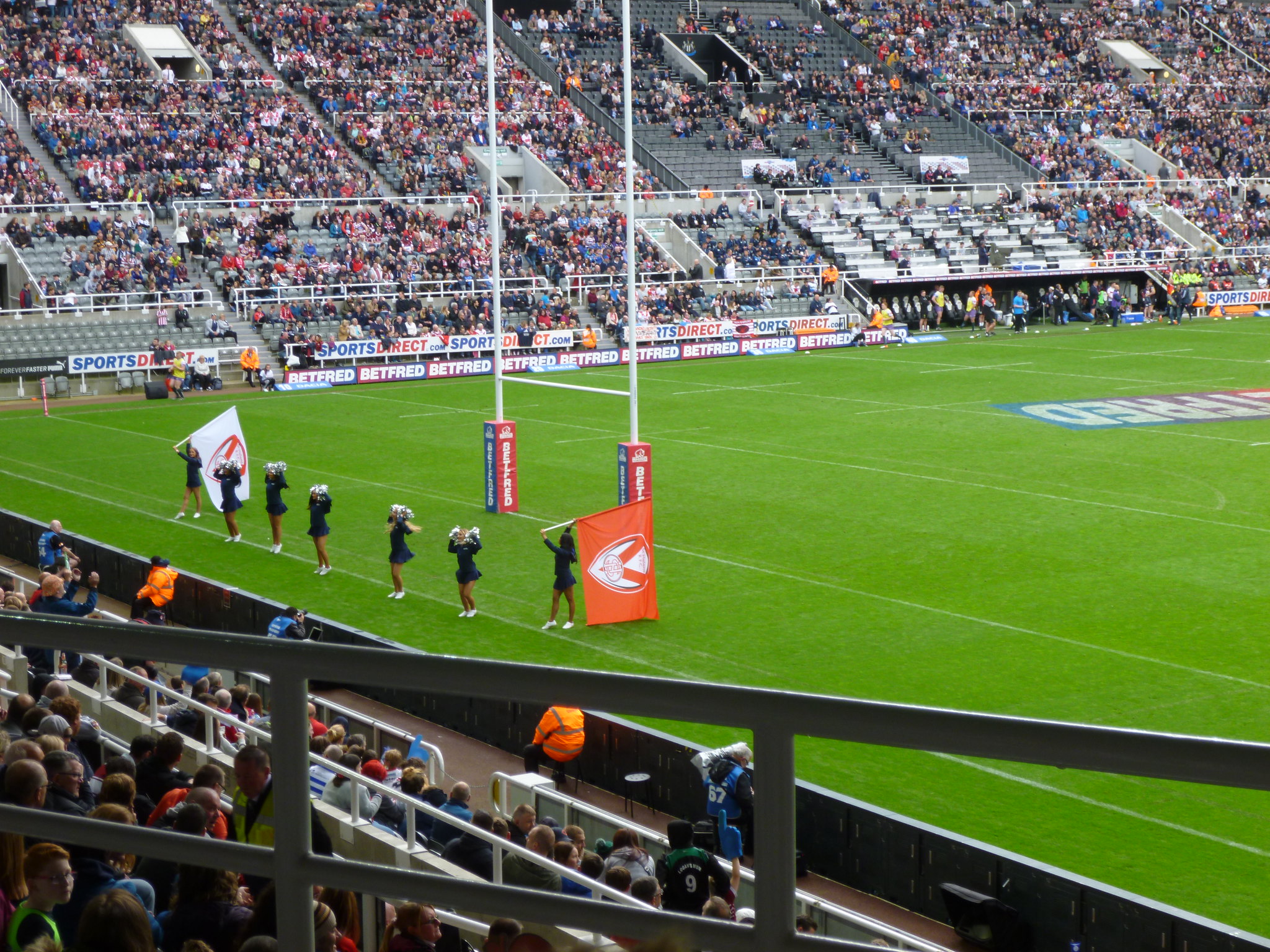 I have no idea how Justin Holbrook did it.  At the time, I wasn’t sure if he’d just told them that he didn’t mind them playing badly he just demanded that they play like professionals, or if it was Saints being their usual inconsistent selves and being awful one week (vs Castleford, I have legitimately never seen them play worse) and good the next.  Since then, it seems to be that it’s Holbrook being a damn fine coach because Saints won the derby this week.  (The Saints vs Wigan derby is often held up to be the origin of the phrase “derby match”.  It’s a big thing locally, and the first official one was 122 years ago.)

The last match on the Saturday was Wigan (them, the great sporting evil) vs Warrington (who are so perpetually the bridesmaids that even they make jokes about “this being their year”).

Warrington had the lead, but they blew it.  Because they are Warrington. 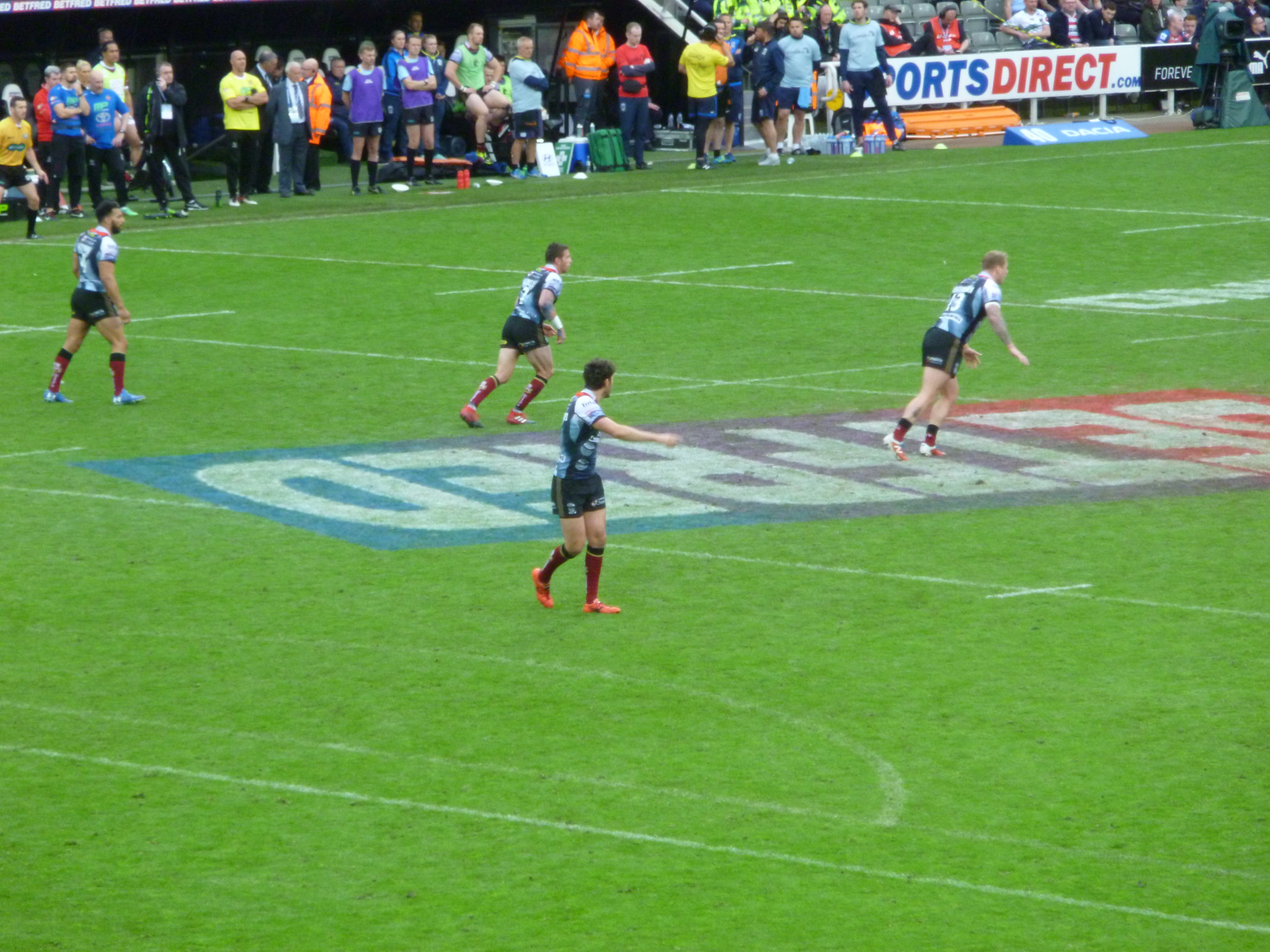 (Stefan Ratchford who is my favourite Warrington player)

I think Warrington’s problem is that their line is too high up the pitch when they
attack so it just needs one good kick or one line break to completely destroy their defence.

The first match of Sunday was Catalan Dragons vs Huddersfield Giants. 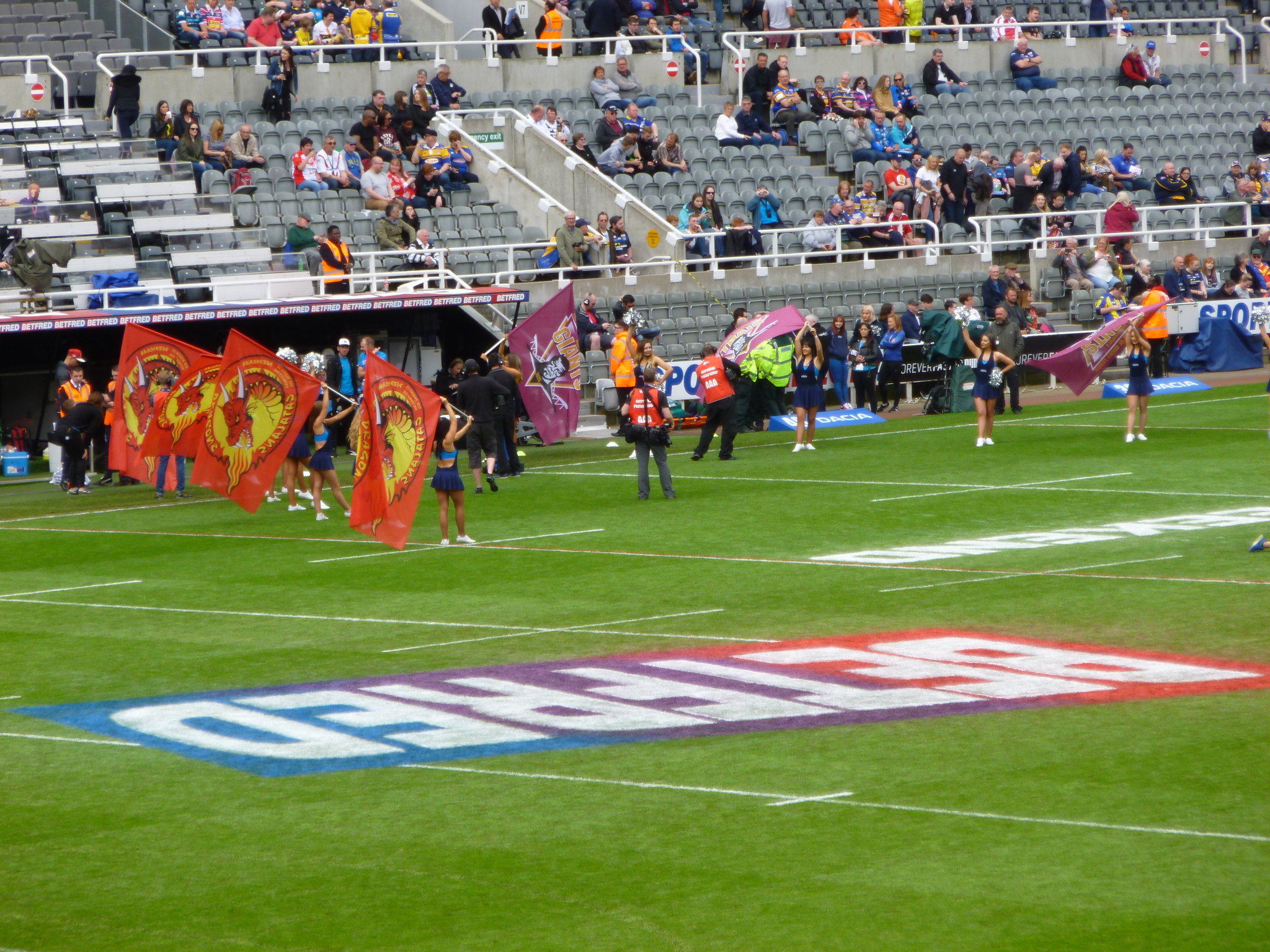 It was always going to be the least well-attended match of the weekend because Catalan are, obviously, a foreign team so, understandably, they have fewer travelling fans.  I still say that there were more Catalan fans than Hull fans though. 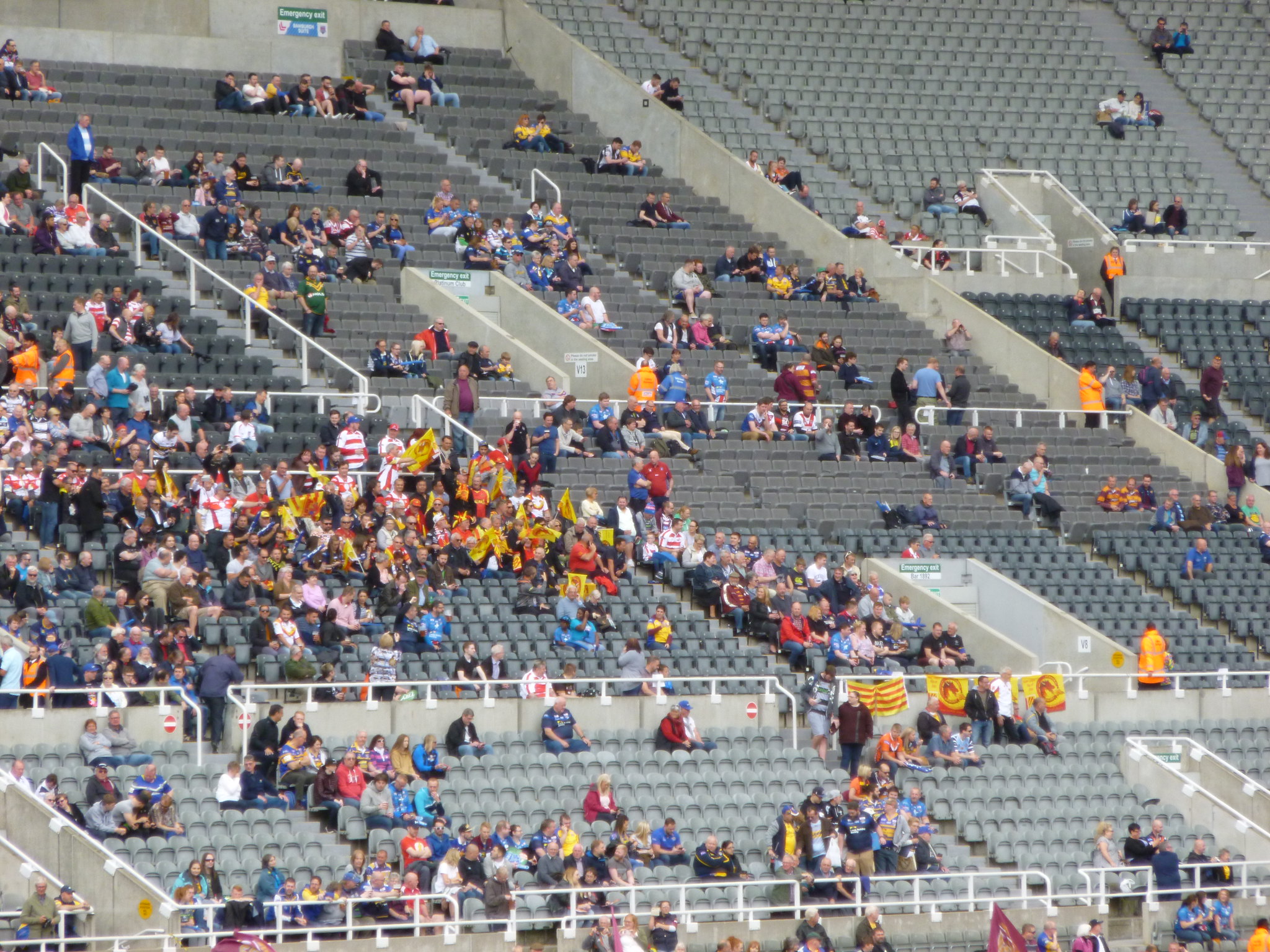 Half time and between the matches entertainment included mini rugby, touch rugby and various sets of dancers. 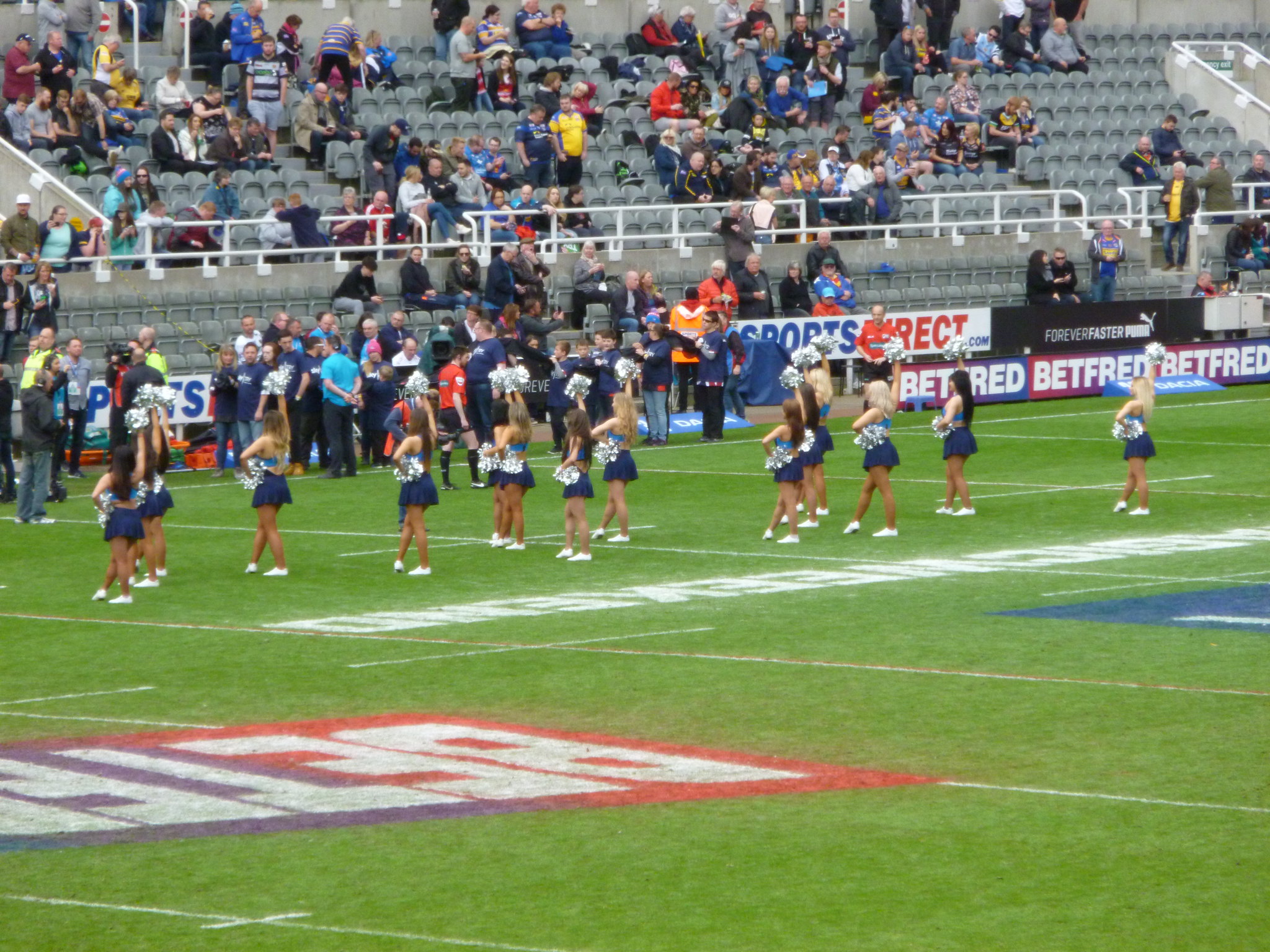 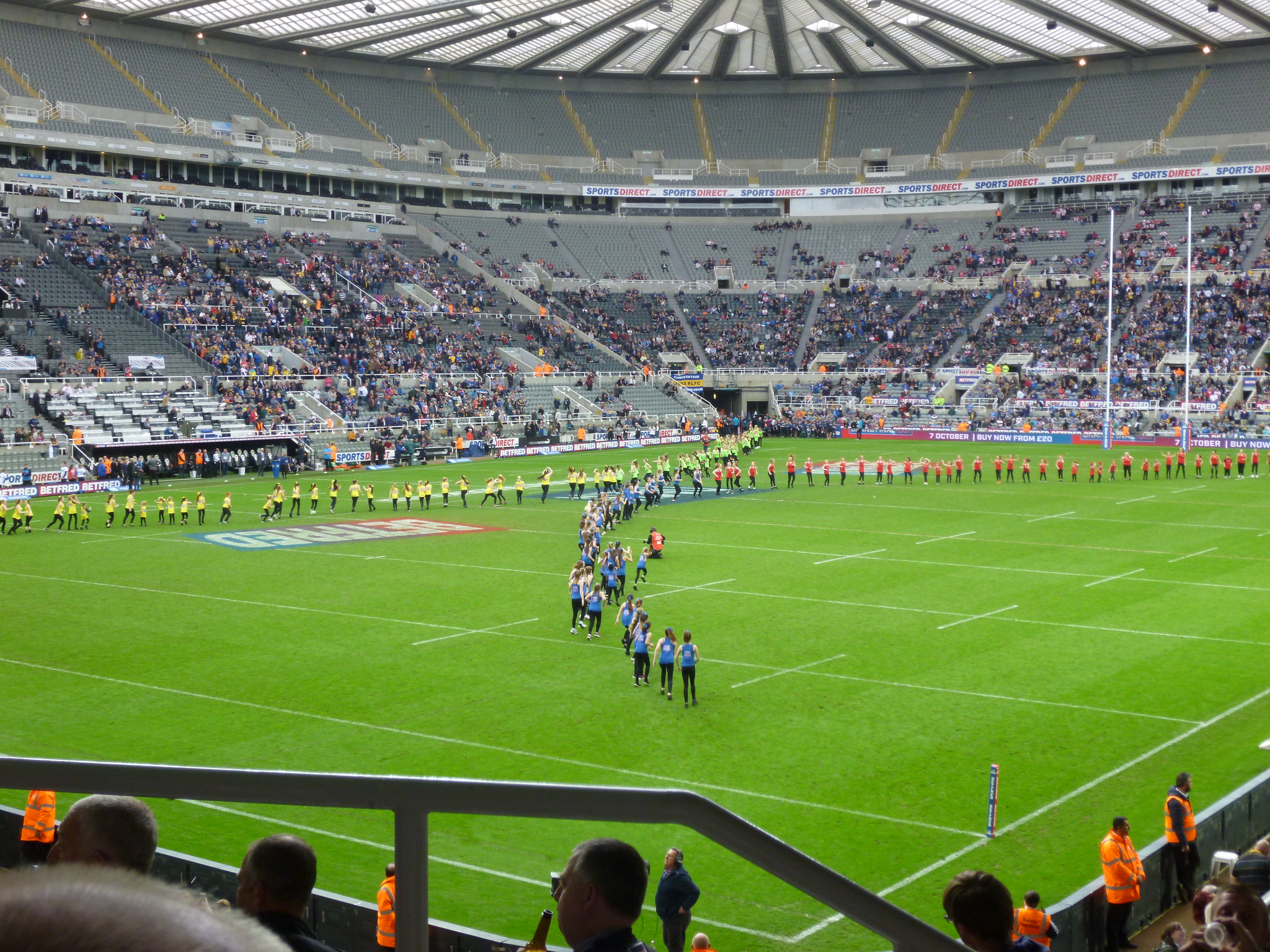 There was also a Mushy Pea mascot because one of the Super League’s sponsors is a brand of mushy peas. 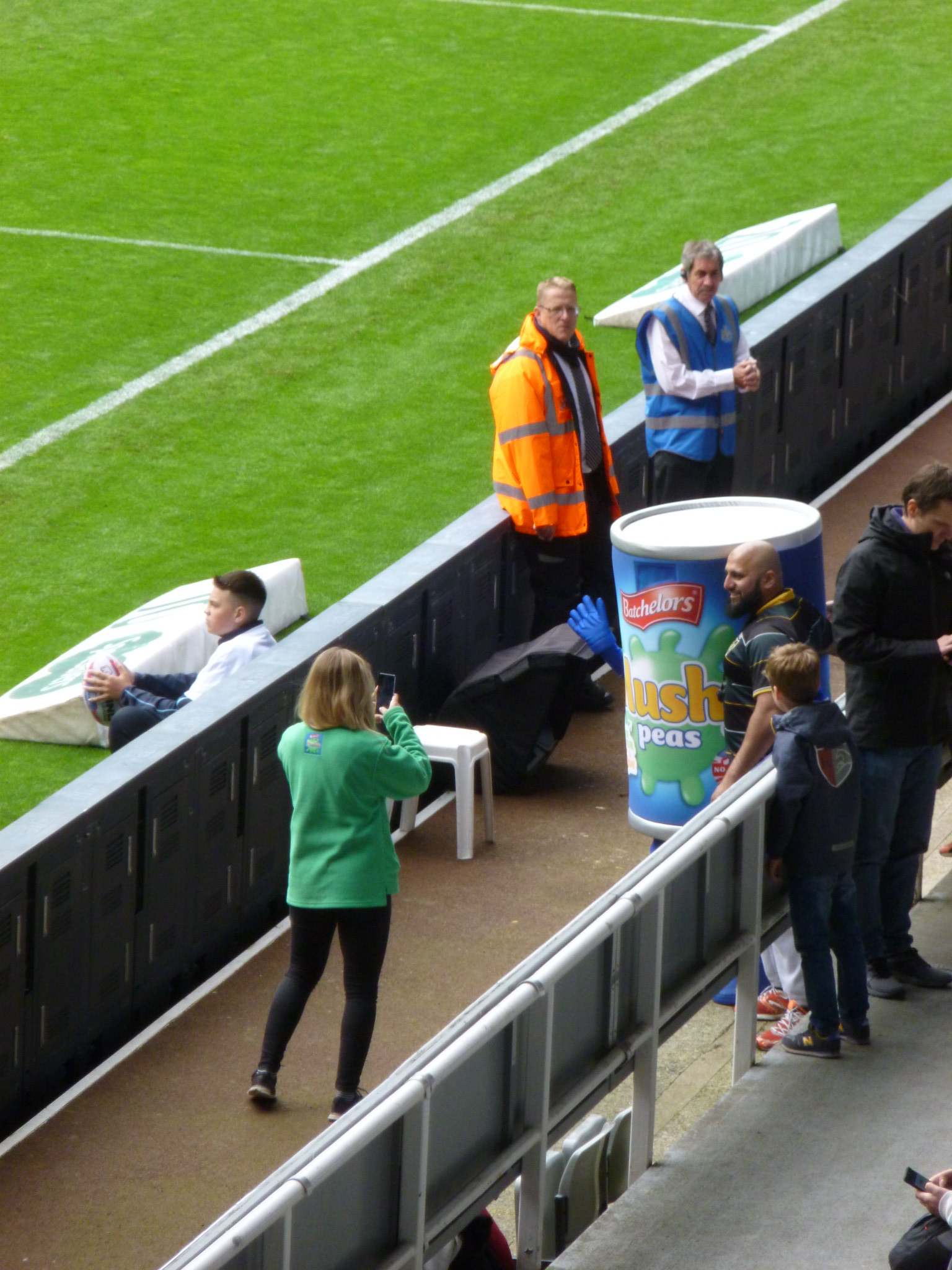 The Huddersfield Giant mascot was very good and shook the hands of the mini rugby players as they left the pitch.

The next match was Leigh Centurions vs Salford Red Devils.  I’m not sure why the Leigh mascot is a pig, but here he is doing one armed push-ups. 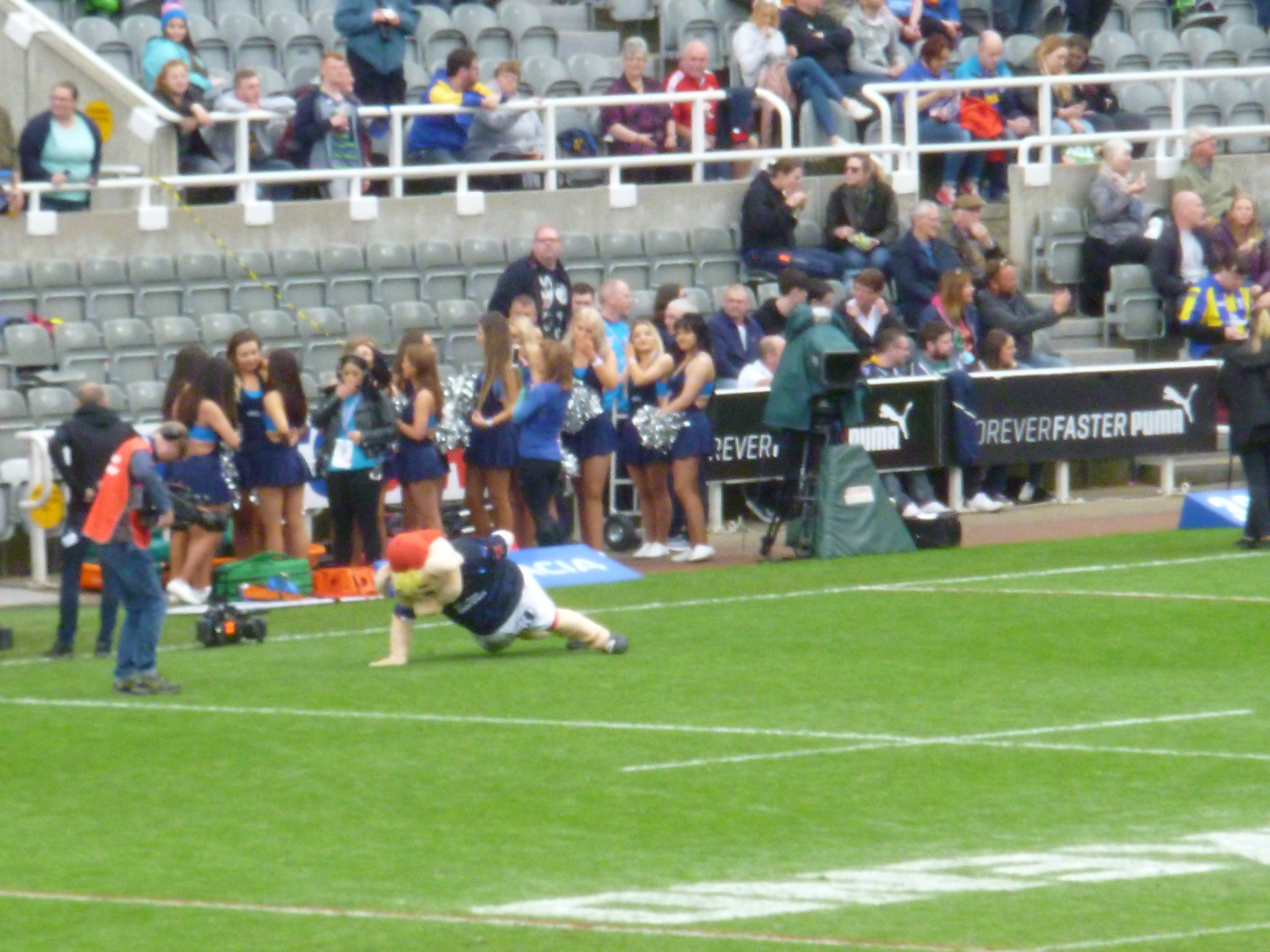 Last match of the weekend was Castleford Tigers, league leaders, vs Leeds Rhinos, their local rivals.

Rob Burrow, who is my favourite player, despite the fact that he plays for Leeds, was playing. Now, for reasons, some of the teams were wearing superhero-branded
kit.  Wakefield were wearing a Spiderman inspired kit, Hull an Incredible Hulk one, Warrington a Thor one (which makes sense because of all the Ashton Sims is Thor jokes), Catalan Dragons wore an Iron Man themed one and Leeds got Captain America.  This is a problem because Rob Burrow looks like Steve Rogers pre-serum, in comparison to the other players. 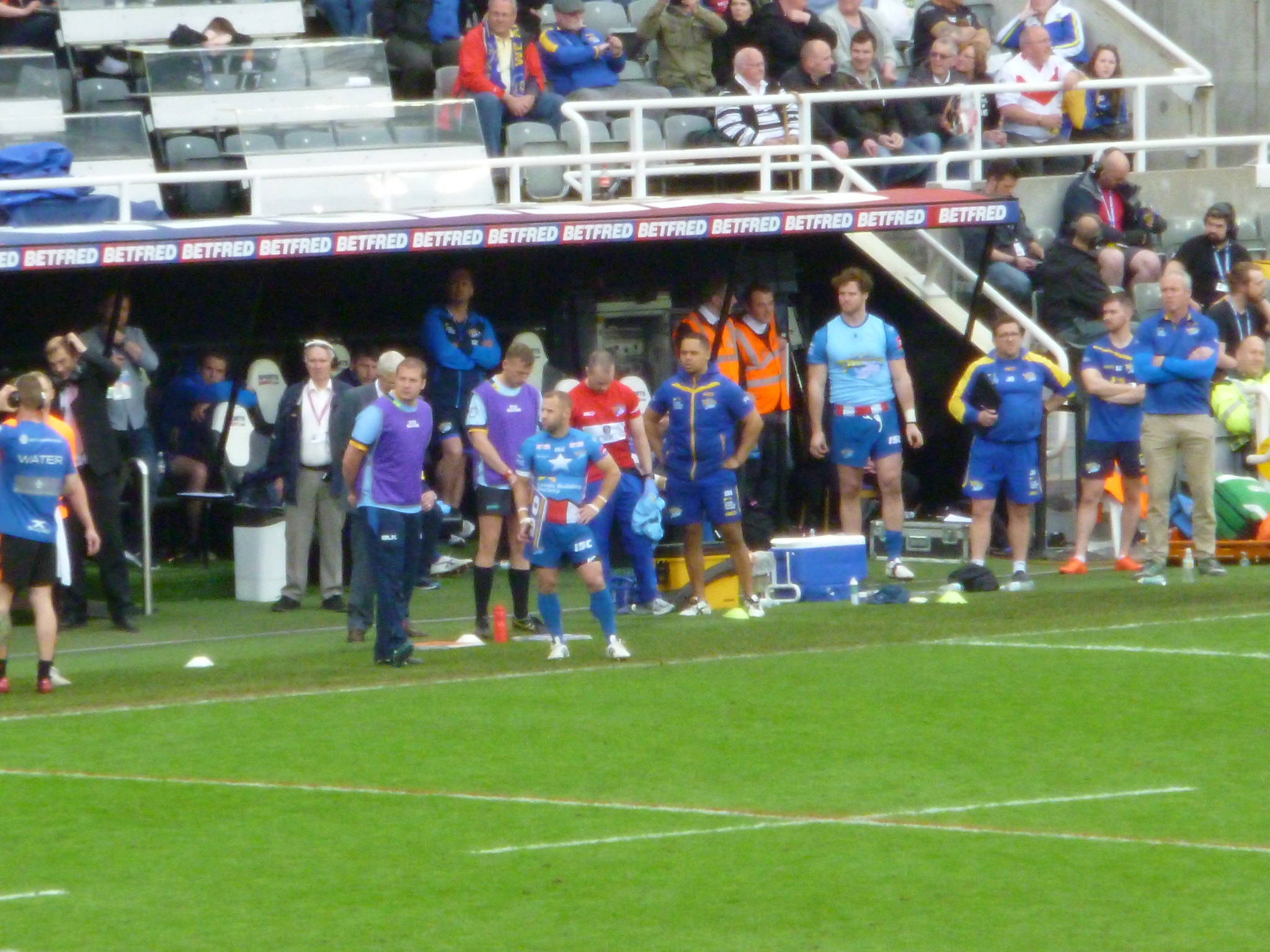 Tiny Rob Burrow’s vital stats are he is 5 foot 5 (165 cm) and 10 stone 6 (66 kg).  And he’s a pro rugby player.  His lack of size may have some bearing on my love for him.  That he is also awesome also does.  Despite the final where he came on at half time and stole the championship from my team by hustle and moxie.

Castleford won.  I think the Castleford fans won for loudest fans of the weekend.

It was great fun.  I recommend going to Magic Weekend if you get the chance.

It’s an amazing experience getting to be around so many people who love rugby. For example, there was a try-saving tackle by a Widnes Vikings player that got cheers from all the crowd (except the Wakefield fans, justifiably) because it was an excellent piece of play.

Seeing all the teams play, particularly from the vantage point I was at, meant you could get a much better feel of how they played than you can from the TV.  On TV, you often don’t get to see off-the-ball play as much. I got to see some marvellous rugby, both attacking, such as Tommy Makinson’s try, and a lot of the tackling.

The atmosphere was great too.  I’m 5 foot 3 and a woman and I went on my own but I knew there wouldn’t be any trouble despite all the fans sitting together, not being separated by team affiliation.

There was a fair bit of banter, such as the Wigan Warriors fans walking round the pitch with a banner saying “We came, we conquered, we ate all the pies”, which got the expected response (and the Widnes mascot giving them the thumbs down).  Or the Warrington banner saying “it’s always our year”.  Then there was the back and forth “stand up for St Helens,” “stand up for the champions” and “stand up if you hate Wigan” chants.  Or the Wigan and Saints fans joining together to taunt Warrington.  Or the Wigan and Saints fans having a throw football match. The stewards were most disapproving, because they are used to football fans but the supervisor steward knew rugby fans are mostly harmless and threw the ball back.

On Sunday, there was an adorable child Leeds fan who ran round a group of Castleford fans when Leeds scored and just got chuckled at.

I love how much colour and sound there was.  Fans of every team took the idea of striking the colours seriously, repping their team.  This included fans of teams that weren’t at Magic Weekend, like the Crusaders fans in front of me or the Toronto
Wolfpack fans to my left.

St. James’s facilities were excellent, except they could do with a better PA system because it was full of fuzzy reverb.

I had a fantastic time, would recommend going, and plan to go again as soon as I have the time and money again.